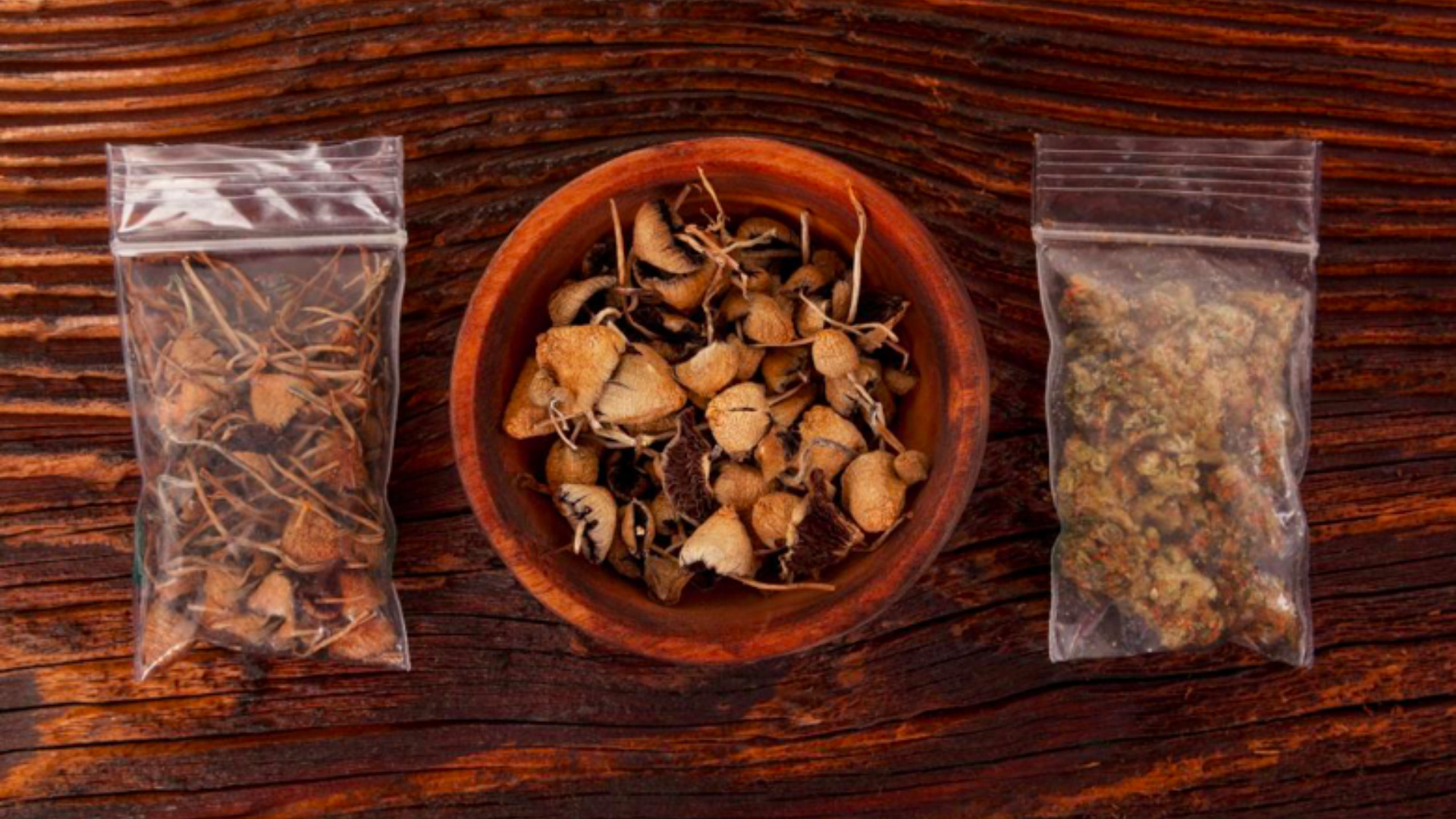 REVEALING THE MIND WITH PSYCHEDELICS

The most prominent incident can be attributed to Timothy Leary, who is known to have made popular the phrase “Tune in, turn on, drop out” in his speech at a gathering of 30,000 hippies in San Francisco in 1967. Leary was then an academic running the Psilocybin Project at Harvard where he experimented with the substance and allegedly used it beyond research purposes, actively promoted its use for recreation and went as far as to administer psilocybin to an undergraduate student off-campus. This led to his eviction from the academy and the last-straw political backlash in which psychedelics were made illegal in the US even in medical use.

Until today, psychedelics still receive unfavorable coverage and highly restrictive regulations, resulting in perceptions of risk. Around the world, only around a dozen countries have decriminalized it.

The name “psychedelic” is derived from the Ancient Greek words psychē (ψυχή, “soul”, “mind”) and dēloun (δηλοῦν, “to make visible, to reveal”). It literally means revealing the soul or opening the mind.

As a naturally occurring substance found in mushrooms in many parts of the world, psychedelics experimentation dates back to ancient Greece where philosophers like Homer, Aristotle, Plato were mixing their wine with psychoactive compounds. DMT, a particularly potent psychedelic, is even produced inside human and mammal brains. From ancient times, psychedelics have been used by the indigenous cultures, such as the ibogaine in Africa or special mushrooms in Mazatec Mexico, to explore the inner landscapes of the human mind and spiritual discovery.

What exactly do psychedelics do to the brain? Three key takeaways here:

They basically change how the brain is wired, as seen in the following neuroimaging scan first emerged in 2014.

Modern medical research with these compounds started in the mid-20th century. Approximately 40,000 patients were prescribed LSD therapy during 1950–1965 in the U.S. All this came to a half after the aforementioned Timothy Leary movement.

After decades being forced underground, today psychedelics are seeing an extraordinary comeback.

Anxiety disorders, along with depression, are among the most common mental disorders in the world today. Depression affects 264 million people globally. Traditional treatment ranges from prescription drugs to counseling, therapy. Addiction treatment to cigarettes, alcohol, cocaine, opioid… involves the same, more or less.

Johns Hopkins Medicine is among the forerunners in bringing psychedelics to the scene. After obtaining US regulatory approval in 2000, the research centre has been conducting numerous trials and produced landmark publications where it proves positive effects of psilocybin in alleviating a range of mental health problems — anorexia, depression, addiction to cocaine or smoking, Alzheimer… and has sparked the revival of psychedelic research world-wide. In 2016, research at Johns Hopkins Medical Centre and New York University both show that psilocybin-assisted psychotherapy is safe and effective for patients facing end-of-life depression. In 2019, the Imperial College London UK launched the Centre for Psychedelic Research. Since then, hundreds of patients have been treated with psychedelics for a variety of physical and psychological illnesses and addictions with results exceeding those of traditional prescription and therapy. Especially, when combined with meditation, psilocybin could be the treatment for whom other traditional methods do not work as effectively. Science has only touched the surface of the therapies these drugs and meditation could offer, but the basic mechanism is that psychedelics and meditation help alter the recycling thought patterns of patients who are under the effects of depression and addiction, eventually assist the patients to break away from these disruptive conditions.

“The most compelling thing that makes psilocybin different from other addiction drugs is that it’s showing this cross-drug efficacy. It appears to have a similar effect, regardless of what drug the person is addicted to”, according to Dr. Johnson at Johns Hopkins Medical.

At the moment, phase 2 clinical trials by USONA in the US are under way and psilocybin could be legal for therapy by 2021. Other institutes across the globe — Canada, UK, Switzerland, Denmark, Finland, Brazil… — are carrying out their own research with different variances of the compounds and their impacts on different health conditions.

Steve Jobs usually gushed about his experiences with LSD. Microdosing — taking tiny doses of psychedelic drugs, usually in the milligrams, so that one does not get high from the drugs but just feels better — is becoming a trend in a number of professional circles as it is thought to stimulate brain function and enhance mental flexibility and creativity. Creativity involves breaking away from rigid cognitive modes, finding new links, thinking out of the box — something that psychedelics is thought to facilitate. For many US tech entrepreneurs psychedelics are now the drug of choice for unlocking creativity and team-building. However, scientific research with concrete conclusions that move away from anecdotal evidence remains rare, as creativity is such a subjective quality.

Reconnecting with the world and with oneself

Addressed at the United Nations General Assemly 2019, we have 11 years left to prevent irreversible damage from climate change. Facing an impending climate crisis, there’s the curiosity as to why some people are motivated to act environmentally, and others not. Looking back at history, frequent public use of psychedelic drugs in the 1960s coincided with widespread environmental movements. Some suggest that there exists a degree of correlation.

As psychedelics free the mind to make new connections by creating new links across previously disconnected regions, it explains why people “see” numbers, feel spiritually enlightened, and could lead to the ability to form new associations and new beliefs. After all, indigenous cultures have been using psychedelics to access their spiritual wisdom, extend intuition domains, provoke a spiritual state of oneness with the world — all of which is being repressed in our modern data-driven world.

On the other hand, taking a psychedelic may simply reinforce previously held ideas. To propel someone to shift their beliefs, they may need to be introduced to the concepts of nature-relatedness and the importance of climate action during the trip. Countless subjective recounts of the “trip” experience report an increase in feelings of connection to nature and being part of it, as opposed to the self-centered ego that exists above and detached from this world.

Dr Carhart-Harris from the Imperial College London explained, “This effect underlies the profound altered state of consciousness that people often describe during an LSD experience. It is also related to what people sometimes call ‘ego-dissolution’, which means the normal sense of self is broken down and replaced by a sense of reconnection with themselves, others and the natural world. This experience is sometimes framed in a religious or spiritual way — and seems to be associated with improvements in well-being after the drug’s effects have subsided.”

John Hopkins’ Professor Matthew Johnson also remarks, “I certainly wouldn’t say that psychedelics are a panacea that is single-handedly going to save the world. But perhaps, if cautiously used under the right circumstances, they could be part of and contribute to an overall greater level of awareness. Ultimately, we’re all completely dependent on each other, we’re on this planet together, trying to figure out how to ultimately survive and thrive, and I think these profound mystical experiences, however they might be occasioned, can perhaps help point us in the right direction”.

Psychedelics are still largely illegal and not suitable for everyone. There is the risk of the so-called “bad trips”. Although generally safe and nonaddictive, someone on a high dose of psilocybin can have impaired judgment and become susceptible to recklessness. Without proper knowledge, setting and preparation, people can have utterly terrible experiences. A recent survey of people who reported having a “bad trip” found that nearly 8 percent of them had sought psychiatric help afterwards. Moreover, some people with a family history of psychosis could be at risk with these compounds.

To partly avert the disadvantages of psychedelics, the Canadian company Mind Medicine is working on a drug that will make LSD less trippy, curb the hallucinogenic effects of LSD within 20–30 minutes from its usual 12–18 hours.

Tune on, tune in, drop out

In the midst of the technological evolution where AI, data and technology becomes king, where the virtual world blends with the physical world, rediscovery of psychedelics may open the doors for further research on how it can not only heal but also to deepen our understanding of consciousness itself, at the same time facilitate social and environmental change. Breakthroughs in science have allowed humans to live longer lives, albeit we’re in a constant search for a more fulfilling life. When used with care, psychedelics can enrich the lives of people seeking spiritual exploration, self-awareness, and making the world a better place.

“Turn on” meant go within to activate your neural and genetic equipment. Become sensitive to the many and various levels of consciousness and the specific triggers engaging them. Drugs were one way to accomplish this end. “Tune in” meant interact harmoniously with the world around you — externalize, materialize, express your new internal perspectives. “Drop out” suggested an active, selective, graceful process of detachment from involuntary or unconscious commitments. “Drop Out” meant self-reliance, a discovery of one’s singularity, a commitment to mobility, choice, and change. Unhappily, my explanations of this sequence of personal development are often misinterpreted”.

Drugs Without the Hot Air: Making Sense of Legal and Illegal Drugs by David Nutt (2020)

How to Change Your Mind: What the New Science of Psychedelics Teaches Us About Consciousness, Dying, Addiction, Depression, and Transcendence by Michael Pollan (2018)

Magic Medicine: A Trip Through the Intoxicating History and Modern-Day Use of Psychedelic Plants and Substances by Cody Johnson (2018)

Stealing Fire: How Silicon Valley, the Navy SEALs, and Maverick Scientists Are Revolutionizing the Way We Live and Work by Steven Kotler and Jamie Wheal (2017)

Breaking Open the Head: A Psychedelic Journey into the Heart of Contemporary Shamanism by Daniel Pinchbeck (2012)

Food of the Gods: The Search for the Original Tree of Knowledge A Radical History of Plants, Drugs, and Human Evolution by Terence McKenna (1993)