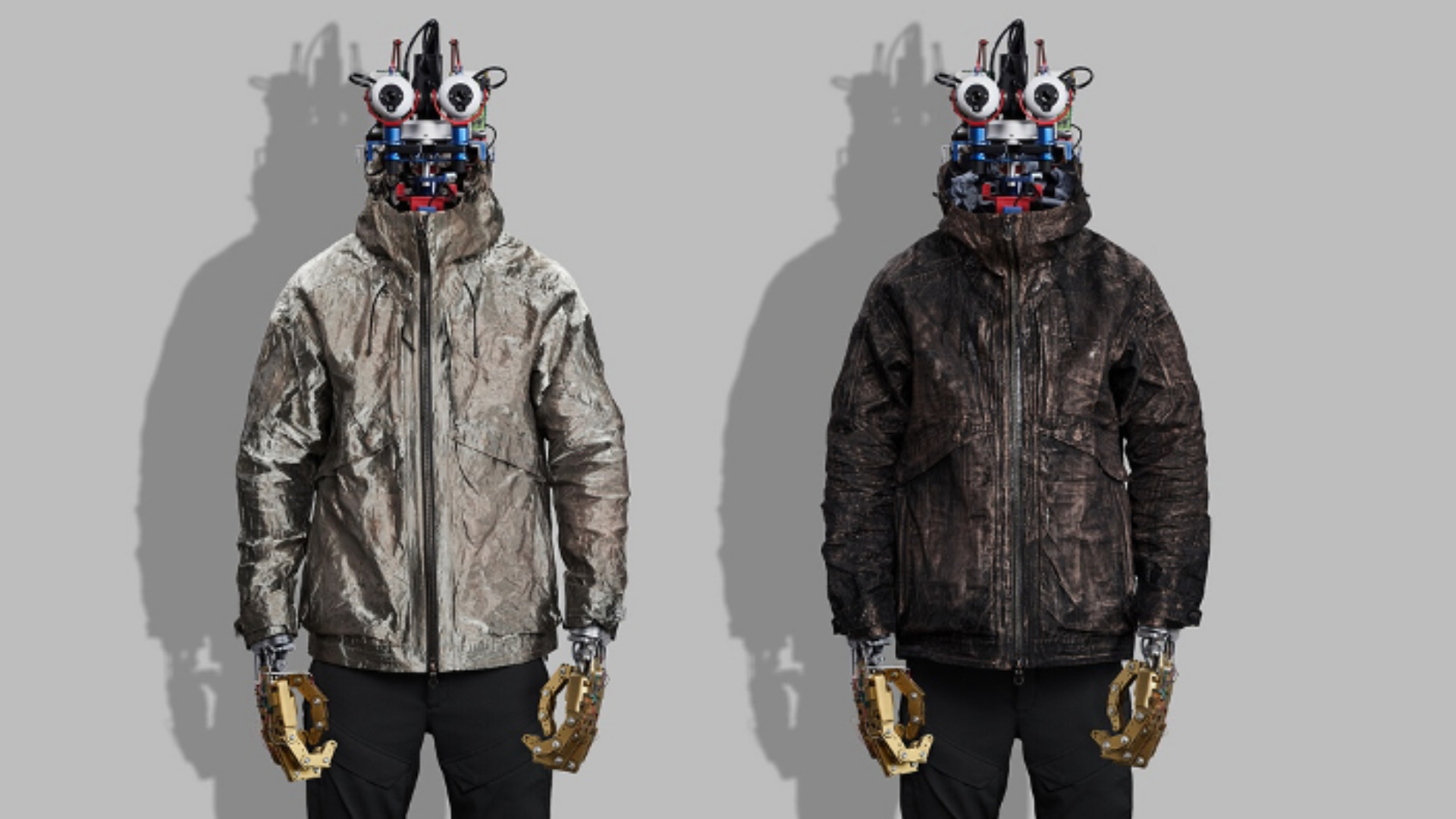 ON HOW THE CORONA PANDEMIC INFLUENCES THE USE OF TEXTILE

Textiles can be seen in the streets more than ever before because of facemasks, that really are ‘in your face’. So, Textile can be seen as a protection against diseases. But next to seeing textiles as protection against a virus, the virus is also an inspiration, an influence if one could say, in the use of textiles. Designers around the world are creating new kinds of textures, print, and shapes that fit the post-corona society.

An example of how the pandemic influences the use of textiles is ‘The Full Metal Jacket’ from Vollebak (Founded by twin brothers, designers, and athletes Nick and Steve Tidball), also known as the ‘virus-killing coat of the future’. Vollebak says “As we enter a new era of disease, the Earth heats up, and fires and floods sweep across countries, we’re radically underprepared as a species for the speed at which change is taking place. As normality shifts beneath us, our survival systems need to adapt — from emergency planning and infrastructure to our architecture and clothing. Clothes have to become intelligent, and they have to do it quickly. So, we’re doubling down on our mission to design for the needs of the next century and not just the next season.” They created a jacket from copper because viruses and bacteria can’t live on copper e.g. COVID-19.

“You can think of copper as a platform on top of which other innovations can be added — a bit like an operating system on a computer. Copper’s ability to resist disease, while also conducting heat and electricity without a power source, make it an obvious contender.” Vollebak adds that “disease-resistant clothing will become a requirement in the future, which is why we’re starting to work with copper now. It’s biostatic, so bacteria and other life forms can’t grow on it. It also has exceptional antimicrobial properties which means bacteria and viruses die when they make contact with it. The copper releases electrically charged ions which first make it difficult for a microbe to breathe, before punching holes in its outer membrane, moving in and completely wiping out its DNA, preventing it from developing any future resistance.”

Research argues that copper has been used to combat disease for thousands of years. The oldest medical tools ever discovered were made from copper 4,000 years ago, and were found entombed with the remains of Qar, a royal physician from the Sixth Dynasty in ancient Egypt. The Smith Papyrus shows that 1,000 years earlier the Egyptians were using copper to sterilize wounds and transport clean drinking water. And they weren’t alone. The Babylonians would sharpen their swords and put the copper alloy filings into cuts sustained in battle, to reduce infection and speed healing.

Vollebak turned a theory about copper into a jacket. Bill Keevil, chair in environmental health care in biological sciences and head of the microbiology group at the University of Southampton had this to day about the jacket “If something lands on the actual copper base, then the copper will have antimicrobial activity. But if it doesn’t land on the strand — let’s say just adjacent to it — do you still get the same effect? All the work we’ve done has shown you’ve got to get direct contact. There are several published papers where, if you put a thin permeable barrier between copper and bacteria, where the bacteria can’t physically touch the copper, then it doesn’t work.”

Some of the designs have padlocks to symbolize lockdown measures

Another example of how the pandemic influences the use of textiles is the Ghanaian COVID-19 inspired textile designs. Where the pandemic influenced ‘The Full Metal Jacket’ on a protection level, it inspired the Ghanaian designs on a more emotional appearance kind of way. “We put a positive twist on a negative phenomenon,” says Stephen Badu from Ghana Textiles Printing, which is a part of Dutch company Vlisco. “The new fabrics have symbols like padlocks, keys, and planes to reflect some of the measures implemented to curb the spread of coronavirus.” Ghana Textiles Printing and Vlisco are known for telling stories through textile design and behind every design, they produce you can find its value systems and sense of art. They see textiles as a medium to communicate.

The corona pandemic is also telling a story. “We believe that it is going to leave a mark in the history of the world, and generations that come after us must get to know that once upon a time, such a phenomenon occurred,” Stephen Badu says.

Not only did the coronavirus influences the look and feel of textiles, but it also influenced the shape. London-based designer Paul Cocksedge designed a social-distancing picnic blanket called ‘Here Comes the Sun’ for life after lockdown. This blanket would allow people to socialize safely and confidently outdoors with their friends or family. The design comprises a looping section of material in the shape of an outline of a circle and four separate pieces of fabric cut into circles, which can be placed around the outline at six feet apart. Cocksedge says that the inspiration for the blanket came when he was going on his “one walk a day” and felt the need to talk to and be close to people. “It’s strange that this instinct has been taken away from us and we’ve weirdly adapted to interacting in this new and unnatural way.”

He argues that social distancing adds a level of worry to our future interactions. “It’s so easy to misjudge two meters, especially when we’re out again socializing with friends and family. It will be hard to remember to keep a distance.” He sees the ‘Here Comes the Sun’ blanket as a playful answer to this problem, reassuring people by allowing them to meet up while still socially distancing.

Why is this interesting if we look at the future?

If we first look at the copper jacket, we could say that metal sounds not really like an obvious candidate to help create the future of clothing. It’s incredibly expensive, has no real precedent in clothing beyond suits of armor, and there’s no established supply chain. But Vollebak exploring its potential because to make intelligent clothing you need to start with base materials that can do things normal clothing can’t. Making clothes out of naturally conductive materials is the first stepping stone towards intelligent clothing. Over the next 10 to 10,000 years clothing has the potential to help us become stronger and faster and even live longer. But everything from exoskeletons to integrated monitoring and intelligence will require power distribution. This is why the ability of copper and graphene to conduct heat and power while killing bacteria and viruses makes them the first likely building blocks for the future of clothing.

The beautiful and powerful prints of Ghana Textiles Printing will also be an important part of the future. Not because of the strongness or intelligence of the garment, but because of the emotional aspect. The fabric is telling a story and as Stephen Badu said “We believe that it is going to leave a mark in the history of the world, and it’s important that generations that come after us get to know that once upon a time, such a phenomenon occurred”.

Also, the social distance blanket is very interesting as we look at the future. Mostly because of human interactions of the future and how people may potentially feel about connecting in the future.

Vollebak’s Metal Jacket Is Armor Against … Something
Vollebak is no stranger to fantastical attire. The company created the world’s first graphene jacket, an algae T-shirt…www.wired.com