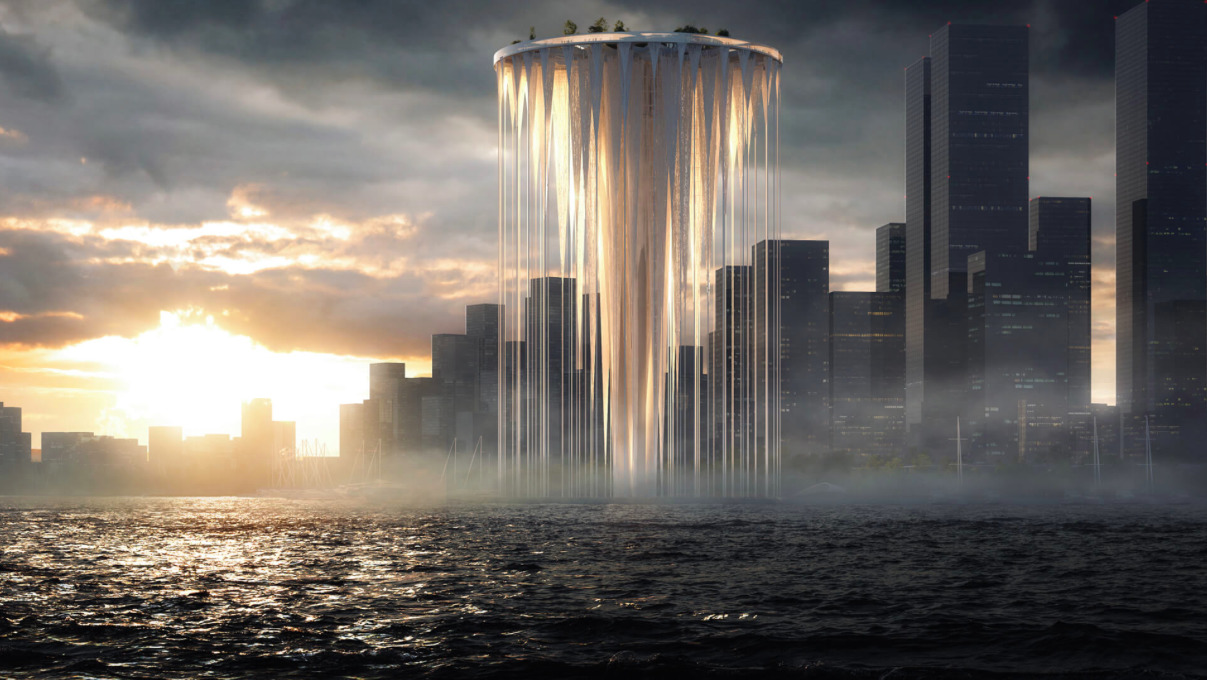 A CLOUD OF SPRAY MADE OF METALS.

Sou Fujimoto architects, a Tokyo-based architectural firm founded by the outstanding Japanese architect Sou Fujimoto, has reinvented the significance of the “tower” in the twenty-first century with the construction of a new landmark in Shenzhen, Qianhai.

The Japanese architect based his idea on the questions like “What does a new ‘tower’ in the twenty-first century imply?” And “How can a skyscraper evolve while still attracting attention, like the Eiffel Tower does?”

The ethereal tower is a 268 — meter — high structure placed over a glistening body of water that will hold 99 islands flying above the Chinese city of Shenzhen’s Qianhaiwan area. While the top of the structure stretches widely outward, the majority of the ninety-nine towers will float with minimal points of contact to the primary core and according to the design, when looking down from above, the islands appear to be floating.

The ethereal tower is conceptualized by the previously mentioned Tokyo-based architectural firm, Sou Fujimoto architects, developed by Sou Fujimoto and according to the design team, the construction is offered as both a single tower and a group of towers noting that “The form suggests a container, or flowers, a group of islands, a cloud of spray made of metals, or perhaps an airborne metropolis in the future.”

Steel, concrete, and carbon fiber are among the materials used in the imagined building, bringing a fresh perspective to the future of aerial cities in which metropolitan regions transform into vertical ones.

WHY IS IT COOL?

Aside from what has already been said about this wonderful project, the majestically risen 99-island from the water that lights up at night giving the shoreline a mystical and surreal aspect, offers unobstructed views in all directions and acts as a genuine destination for tourists.

A three-dimensional exhibition area is held on the upper deck which also serves as a social hub and a viewing platform for visitors and locals alike, with a stunning panorama of the city and harbor from 268 meters above water. This astonishing ethereal tower also features a restaurant and café.

With the help of this conceptual foundation, the team aspires to represent the century’s ever-changing environment.

By placing high-value thermally insulated glass which protects the interior of the proposed construction and the porous walls, on the other hand, decreases wind pressure. This interacts with thick façade pockets, which act as light filters and limit solar gain.

On the highest level, green partitions are inserted to decrease sunlight gain. It is accompanied by a water reservoir that recycles rainfall to nourish the greenery.

To assist in production of electricity, a wind turbine that is mounted vertically is going to be incorporated into the structure. Making this incredibly well-designed structure a highly sustainable and environmental but also fantastical project.

Shenzhen is China’s fastest-growing metropolis with a colossal skyline, within decades, it went from a sleepy fishing village to a busy city. Every year, millions of people from all over the world travel to its city core to take advantage of its investment-friendly policies while tourists marvel at the futuristic landscape.

In terms of overall GDP, Shenzhen is just behind Shanghai and Beijing in China. The city now wants something remarkable to show for all its development.

Being aware of the Chinese metropolis that has lately experienced a slew of large-scale projects, the sculptural and energetic concept created by the Japanese architect Sou Fujimoto who hoped this initiative would represent the future of civilization in an age of complexity and diversity, stands out as valuable and is now a welcome addition.

Trying to reimagine what the role of a new tower means in the 21st century, this dynamic and sculptural idea “The Ethereal Tower”, created by Sou Fujimoto, the Architectural Review, Japanese Institute of Architecture, the Wallpaper Design award winning architect in addition to winning the Marcus Prize for Architecture, now has the capability of allowing you a glimpse into the future of urban life and design.