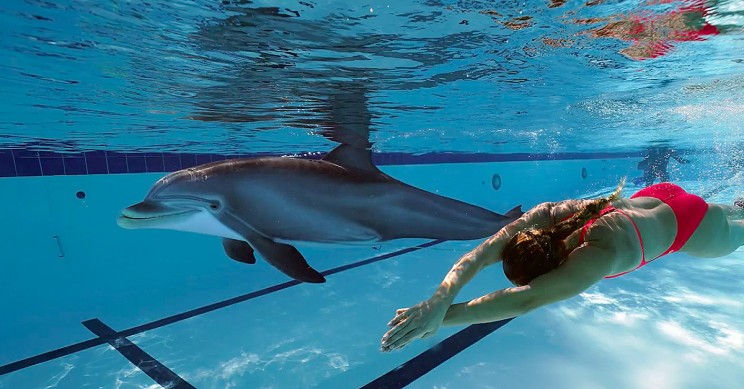 The idea of a robotic dolphin came from an ethical problem New Zealand tech-entrepreneur and augmented reality expert Melanie Langlotz experienced after she was asked to design an aquarium with live animals in China together with her business partner Li Wang. The idea of using real animals stirred up an ethical issue within themselves and didn’t sit well so the tech-entrepreneur looked for a more animal friendly approach, thus the idea of using robotic counterfeits was born. Finding experts worthy of the challenge was hard, mainly because the machine had to be able to endure salt water for a longer amount of time to make the robot financially feasible and attractive. In the end persistence paid off and Langlotz ended up working together with no one less than animatronics’ experts Roger Holzberg (former vice president and creative director of Disney) and Walt Contri who had already acquired quite some experience; they previously helped designing robotic animals for movies like Jurassic Park and Star Trek. The collaboration resulted in a 270 kg prototype that looked so real that volunteers swimming with the robot didn’t notice the difference until they were told that they were dealing with a fake.

The robotic bottlenose has the exact same appearance and movements as a real dolphin and can even interact and recognize human intimation. “This dolphin weighs, feels and has been engineered to simulate everything from the skeletal structure, to the muscular interaction with that skeletal structure, to the fat bladders and weight deposits on a real adolescent bottlenose dolphin.” Holzberg said. With a battery life of 10 hours, the dolphin has plenty of time to explore the aquarium and it doesn’t need to worry about the salt water problem; he can last for 10 years in it. Several Chinese zoos and aquariums already showed enthusiastic interest in the robot ever since they are struggling with the new bans on wet market and wildlife trade that the Chinese government carried into effect right after the COVID-19 outbreak.

The team is already working on mass-producing the robot and their next model that will possibly even have a functioning blowhole.

We have to look for more sustainable ways of living in every part of our society, now more than ever. While on one hand aquariums and zoos are raising more and more controversy from the public on the other people are still assuming that aquariums contribute to wildlife preservation. But studies show that it’s actually quite the opposite and according to Dr. Paul Dolman there is “no point in captive breeding without conservation in the wild. What if we could design more species of robotic animals, functioning on sustainable forms of energy? These could be the zoos or aquariums of the future: with low impact on endangered wild life and less maintenance. They would still have the same entertainment value but won’t raise as much ethical questions. Next to that, mechanic animals could have educational value as well: they behave and appear the same way as real ones so scientists and students can experience and study animals up close and even research animals that would normally be considered very dangerous.