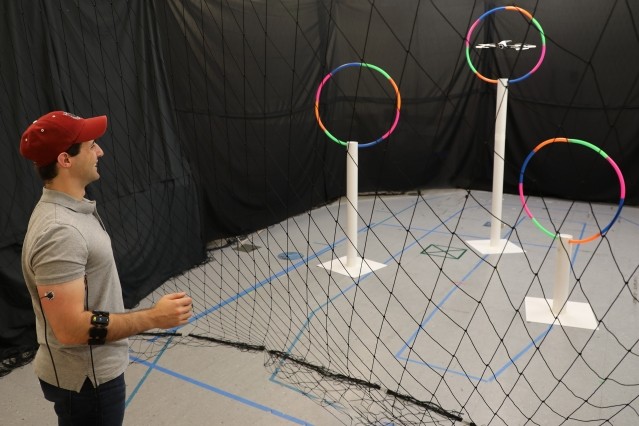 We can already see that robots are playing different roles all around us. But as they are entering more and more sectors it is inevitable to think about how people are collaborating with them? How are people controlling them and working along with them?  In this blog I am going to give one of the many possible answers to these questions.

The MIT Computer Science & Artificial Intelligence Laboratory came up with a system called “Conduct-A-Bot”. “Conduct-A-Bot” is used to pilot a robot by signals from human muscles. The signals are transferred through wearable censors put on the muscles. There are only two or three wearable sensors needed and they are put on the biceps, triceps and forearms. These sensors send the muscle signals straight to the robot so no other devices are needed – there is practically no barrier between the user and the robot.

“We envision a world in which machines help people with cognitive and physical work, and to do so, they adapt to people rather than the other way around,”

Professor Daniela Rus, director of CSAIL, deputy dean of research for the MIT Stephen A. Schwarzman College of Computing, and co-author on a paper about the system

“Understanding our gestures could help robots interpret more of the nonverbal cues that we naturally use in everyday life. This type of system could help make interacting with a robot more similar to interacting with another person, and make it easier for someone to start using robots without prior experience or external sensors.”

Because of its ease of use and effectiveness “Conduct-A-Bot” can be used for many purposes and within different fields. Nowadays everybody has his own Cortana, Siri, Alexa or Google Assistant and it’s true that they help us a lot now. But what if they could move? What if they could bring us a beer while we are lying on the coach watching Netflix? Or maybe you never have to clean the house again because this robot can do it instead of you! In addition, this type of system could be useful when exploring unknown and hard to access territories because it allows people to navigate and monitor drones while staying at one place. It could also be that the wearable sensors are used to lift and move objects or deliver heavy packages in the manufacturing industy.

It is interesting that such machine can be used in times of social distancing as well. For example, it could be navigated to clean a hospital room or even bring medicines to areas with a danger of infection.