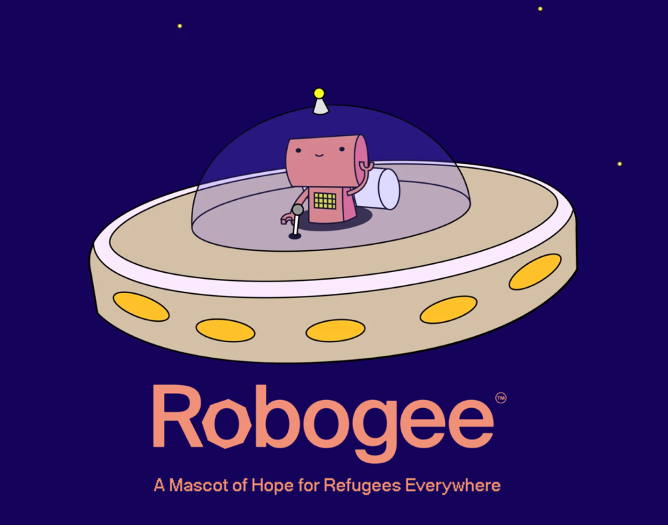 Refugees are often described as helpless people with no future, scary or even capable of committing crimes, but the misinformation and stereotypes are far from the truth. In reality, refugees are ordinary people, like you and me. People who have lost everything. People who are forced to leave their entire lives behind, go to a completely new country and try to start over, sometimes without having a clue about that country’s culture, traditions, language or lifestyle.

They are exceptionally resilient people who survived challenges a few can imagine. The refugee community, especially children, can sometimes grow up with the mindset that they are hopeless victims and that it’s hard for them to find the right opportunities to shine.

So, in comes Robogee! A young, smart and curious Robot-Refugee, who is forced to flee her home planet when danger strikes. Based on a real robot, this children’s character is designed to change the common negative perceptions and introduces a new way for people to learn about and engage with the refugee community, and amplify the true capabilities and curiosities of young refugees.

The story of how this mascot was created goes all the way back to 2016. It all started when trained Neurosurgeon Dr. Fadi Alhalabi began to set up pop-up clinics in Lebanon after realizing that there’s a lack of accessible healthcare for Syrians, Palestinians and Lebanese. These clinics later developed into becoming a refugee-led humanitarian NGO called Multi-Aid Programs or MAPs.

Dr. Fadi recognized the barriers to access education and with that, MAPs started to develop schools inside the camps where the refugees live. He came up with the idea of teaching robotics to students as an indirect psychosocial support activity. He trusted it could be a different way to target PTSD and help with the mental health of these adolescents.

And so, begins the tale of Team Hope. Reaching out to engineers and friends from Syria with experience in the field of robotics, Dr. Fadi and his associates built up a program and trained the Syrian teenagers. They later created a small team to enter the robotics competition at the American University of Beirut.

The competition is a prestigious one and usually won by experienced participants. Nobody thought that Team Hope and their Robogee would exceed expectations without having any knowledge prior to that. But they did! The team won and went on to win over 60 national and international competitions, transforming Robogee into a powerful symbol of hope.

This is just to prove what students or kids are capable of when provided with the highest quality of learning opportunities, no matter what life has thrown at them.

As the years went by, Robogee transformed into something bigger, inspired by the journeys of the actual refugees, this character encourages children to realize their own worth, their potential and capabilities and that whatever their dream is, they can achieve it. The aim of developing this character into what it is today was to tell previously unheard stories of the refugees and communicate them in a way that spoke to children and adults alike.

To do that, MAPs has partnered up with a Dutch creative agency — We Are Pi — to develop Robogee as the world’s first refugee hero.

The character is forced to leave her planet when danger strikes and travels through the universe encountering worlds directly inspired by the real, personal stories of each member of Team Hope. Because this hero shows the experiences of the refugees, it makes room for authenticity, rather than to tell the ‘refugee stories’, it amplifies the distinct narratives to create fantastical landscapes.

The process first starts by listening to the experiences of these kids, making sure they’re comfortable saying them. Then, their stories are transcribed and passed onto the team at We Are Pi, who then listens to the material and finds a world to bring to life and document what’s in the heart of that child’s story. The idea is to translate the memories and trauma of the refugees’ experiences into sketches but in a tone that’s easy for kids to digest.

Robogee encounters journeys and different obstacles, teaching lessons of self-belief, courage, belonging, appreciation, responsibility and hope as valuable and relatable pause points for those reading, whether they are refugees or not.

Robogee is also being brought to life by the Crochet Community Collective, started by MAPs in Summer 2019. A network of 50 Syrian refugees and low-income Lebanese women crocheted 12,000 Robogee dolls. 100% of the profit from the sales of Robogee dolls goes to the women who make them by hand and to support refugee education. Apart from that, the art of crochet has served as a lifeline for these women, as a relief from anxiety and stress and being a part of a social circle within the marginalized communities.

Like the members of Team Hope, Robogee’s world is full of color and expression. She’s unique, fun and joyful. This character is a reminder that creativity and innovation become powerful tools for survival and peace of mind. It’s a community initiative designed to protect refugees from the victim mindset and to activate them to think about a brighter future while giving real hope.

What makes this project so exciting is that it’s just the beginning of the story. It asks many questions about the standards of living and education of refugees and it resists humanitarian benchmarks while rewriting its own rulebook. The sky is the limit.