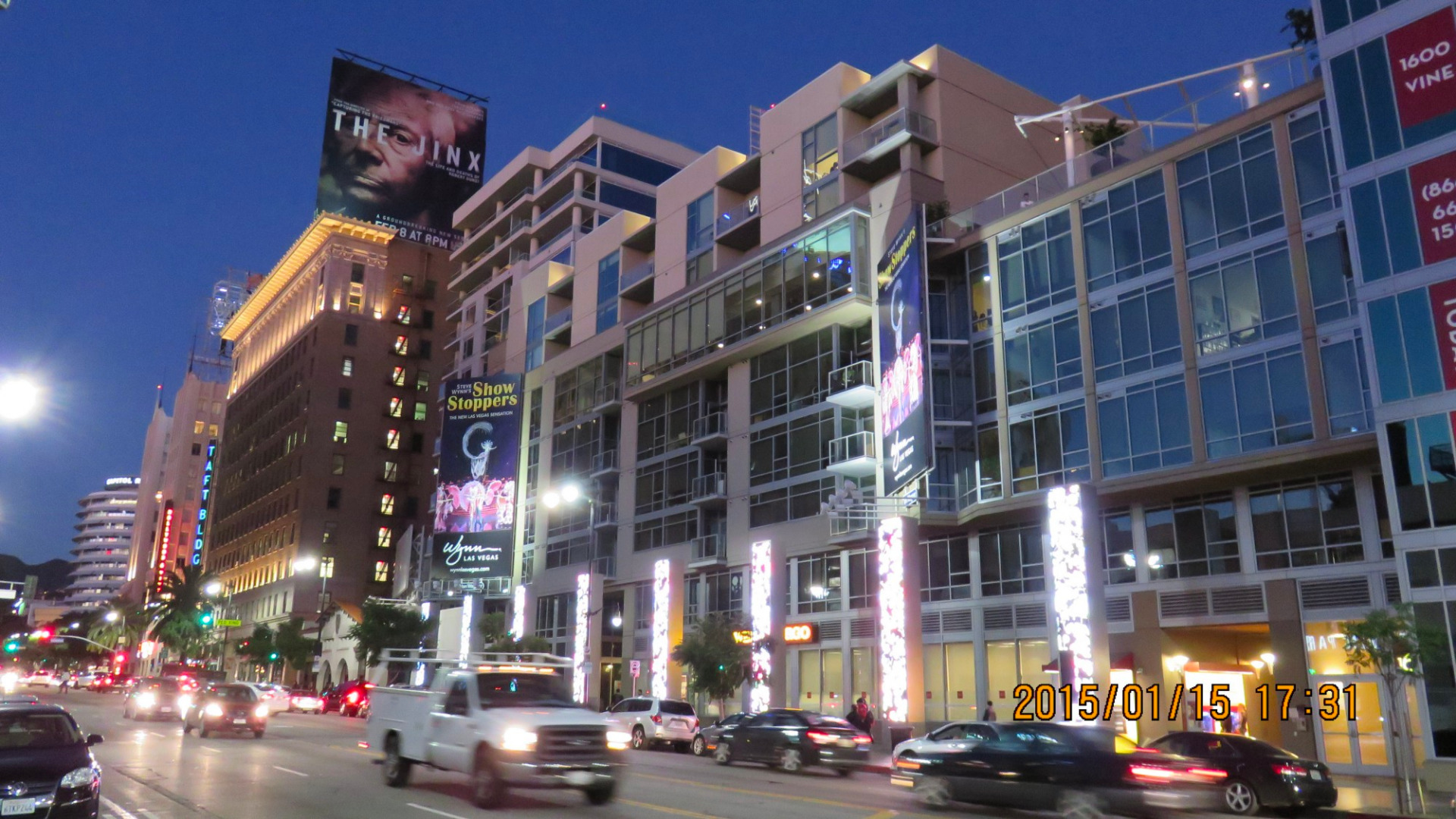 1600 North Vine Street is not unlike many modern Los Angeles apartment buildings. Pool. Views. The svelte fashionistas of the Melrose corridor like its smaller kitchens and larger wardrobes. Bathrooms equal or outnumber bedrooms — important for harmonious roommate relationships. It sits a stone’s throw from the corner of Hollywood Boulevard, the traditional epicenter of the movie biz. The Walk of Fame passes by; Audrey Hepburn and Cary Grant bookend its front door. The legendary Brown Derby restaurant once stood at this address, over whose tables moguls drank gimlets and struck deals. In its ten year life, the building won California Apartment Association Property of the Year no less than three times. 1600 Vine wears its registered trademark with grace: The Home to Hollywood®.

But don’t be fooled by its historic location. The building plays home to the new Hollywood, not the Hollywood of talkies, streetcars and bootleggers. The complex features five business lounges. High-speed wi-fi blankets the building. USB ports abound. 1600 Vine plays host to events such as the Made in Hollywood Awards, and the building has its own red carpet walk with a bannered Step-and-Repeat photo backdrop. Its residents are among the American social media elite.

But around 2017, policies changed at 1600 Vine. The circus of content creation soured a little. Management gently discouraged recording in common areas. Residents who made a living outside the social media found the atmosphere draining, and it interfered with the quiet enjoyment of their home. Logan Paul was actually evicted from 1600 (and the building next door) for such filmed stunts as dangling money to followers on the street with a fishing rod, courting his fans shirtless on his balcony, and smashing plates — his signature move. By 2018, a Yelp reviewer was able to write “I was skeptical when we were first looking to move in because of some of the things I read online about this being a building for rude social media stars (which I am not into,) but most — if not all — of the people causing trouble are gone!”

How did Paul cope with the loss of his cribs? Simple. He moved into a house.

That house happened to be the headquarters of his brother Jake’s highly successful social media squad, Team 10. The younger Paul appeared to be making the same impression on his Beverly Glen neighbours as his brother made on the residents of 1600 Vine. Not long after, both bought houses away from the center of the action, Jake in Calabasas, and Logan in Encino. This reflected, of course, their material success. But just as much, it reflects a truth which the pioneers of Hollywood discovered in the early 20th century. Moving image content needs space, light, and facilities — especially for American-style content, heavy on conspicuous consumption. The forecourt of Jake’s house can park so many exotic cars for filming, Google Maps mistakes it for a gas station.

Leaving aside the social media stars who produce gaming material — such as YouTube’s most prominent breakout star, PewDiePie — the days of the simple talking-head vlogger are numbered. If you’re not dispensing makeup tips or unboxing your shopping, your content generally requires a physical space to produce.

Much UK and American social media content involves pranks — which, at least to some degree, take up space; the New York Times characterizes Jake Paul’s content as Jackass for the Ritalin generation. The Beta Squad recently rented a crane to test fans and online contestants who claimed they could make an iPhone unbreakable. Magician Zach King (23.3m Insta, 43.5m TikTok) directs followers to his relatively modest (7.1m) YouTube channel to see his “best” videos, which often show athletic feats and optical illusions in larger-scale physical environments. David Dobrik (12.8m Insta, 17m TikTok, 17.5m YouTube) re-enacted the famous billowing plastic experiment beloved of science teachers, but on an enormous, life threatening scale; it became the top TikTok video of 2019, with over 18m likes. To do this stuff, you need serious room.

The music/music parody content of the major platforms — especially TikTok — inevitably make actual noise. The UK’s sixth largest influencer (second in music) is Joe Sugg (5.5m Insta, 1.1m TikTok, 3.6m Youtube). He rose to fame through victory in Simply Come Dancing; thus, many of his videos require a lot of floor space. He and his partner Dianne Buswell share a spacious, luxurious house in London, no doubt conscious of the lack of downstairs neighbors.

A second important element of non-gaming content is aspiration. Vloggers and influencers often work their best when showing a material life that viewers would love to live. Unboxing expensive gadgets and wearing expensive fashion attracts eyeballs, but offer a limited canvas for envy. Many Gen Z viewers will be able to afford a luxury accessory, but the thing which really remains out of reach is real estate. It’s lesson the Kardashians and the Real Housewives have taught the mainstream media: your house is as much a star as you. Pools cut it, hot-tubs don’t

An environment like 1600 Vine affords the opportunity for spontaneous collaboration for creators, and the promise of imminent chaos for viewer entertainment. But its aspirational potential is smaller. Rents start at USD $2150 for a 612 sq ft/53 sq m studio apartment; out of the reach of many Gen Z audience members, for sure, but not outrageous by the standards of a major American city. It’s far from a college dorm, but it’s still geared to a relatively modest upper-middle class professional seeking service, convenience and privacy. Peak vloggitude needs more.

It needs a house.

The Rise of the Influencer House.

Many AirBnB properties forbid filming, citing security concerns and the potential for damage. Enterprising investors spotted the unmet need. For example, Village Studio looks for homes near the centres of social media creation, and styles them as sets. Stars can do a deal to use the space for free, but must tag the brands which have dressed the space. The firm now offers many more creative services, and curates influencers to match brands who seek their counsel. A talent agency based on a facility.

Such a highly curated approach limits one of the most important means by which an influencer climbs the algorithm. Daily posting, often the minutiae of the influencer’s life and emotions, forms the cornerstone of much killer content, and can build an influencer’s success. Quite simply, that means filming at home.

In late 2019 and early 2020, a new phenomenon reached public awareness. The influencer house had picked up steam.

The trend dates back to 2009, with the establishment of the O2L house (2.7m YouTube). The house reflected its namesake, the online game Second Life, where individuals can invent the kinds of people they want to be in life number one. It focused on challenge and competition, eventually folding in early 2015. The residents claim the end was a natural consequence of the channel’s success. Each member went on to create their own channels; two came together to create a new venture which centred on another house. The aptly named Reality House apes TV formats like Celebrity Big Brother, with YouTube stars successively being voted out. The new house has achieved a modest increase over the original with 3.7 million subscribers as of May 2020. Do the antics simply not reach the standards of outrage set by the Paul brothers and their ilk? Does the being voted out of Reality House have the same intimacy and urgency as being kicked out of 1600 Vine?

Most prominent of the new influencer houses is Hype House (4.9m Insta, 15.6m TikTok, and a mere 1.4m YouTube). Located in a gated Los Angeles street, a search term often associated with Hype House is mansion, which suggests the level of glamour amid which the many goofball antics take place. The mansion has a cast of 20, with six permanent residents. Brainchild of influencer Thomas Petrou (5m TikTok), the house benefits of relationship rumours between two of its most prominent residents, Charli d’Amelio (58.5m TikTok) and Chase Hudson (20.2m TikTok). A true collective of practitioners, Hype House and others like it echo the story of the original United Artists, where silent-era film stars founded their own studio to maintain creative control.

Influencer houses afford creators a community to spark off each other (and lift each other’s reach) with the added bonus of a music/dance/noise/stunt/minor-explosion-friendly environment.

To date, many such ventures have formed on the backs of the most successful influencers, with established stars breaking away to form their own new houses. But in recent months, we’ve seen a new phenomenon. The house where an influencer pays their rent in fame.

Recently, New York Times Style Journalist Taylor Lorenz obtained pitch decks for several Influencer Houses launched not by stars themselves, but by a commercial agency called Influences.  Lorenz notes that in some cases [the influencers] pay zero rent, and the phrase should give us pause.  In her book, The Nature of the Future: Dispatches from the Socialstructed World, author Marina Gorbis describes a new future, where those who own platforms may command the labour of those who wish to succeed. She describes this as the Digital Manor, clearly comparing it to feudalism. In some ways, her point is apt. Historically, much wealth has depended on ownership of, or access to, land and shelter. In the 21st century, luxury mansions are the fertile fields of yore.

Before the movies, land built Hollywood. Open space, bathed in sunshine, attracted the movie business from dark, crowded New York. So, too, does it attract the trade of content creation. Likely, the future holds a re-emergence of a twentieth century style studio system. Are influencer houses not the equivalent of studios employing contract players, but reinvented for the gig economy?

The studios had the light, space and equipment for creators to create and collaborate. The stars worked the system as much as the system worked the stars. The unaffordability of real estate space for aspiring Gen Z creators looks to be driving a similar phenomenon.  But the studios had one more item to add. Distribution.

The landlords of the new creative class have a more distant relationship with their distributors. Movie theaters were dependent on studios for content, often held in place by legal and financial structures. But algorithms are more impersonal and opaque. Will that change?

Why shouldn’t YouTube, Instagram or TikTok get in on the game? Why shouldn’t they launch their own creator houses? The trend toward in-house creative in marketing clients and management consultancies runs in parallel. Creators will create for anyone who gives them the opportunity and the stage; many might relish the professionalization of a hitherto chaotic social media culture.

Social media promised the decline of the gatekeeper for artists, but gatekeepers have re-emerged. Not just in the form of algorithms, but in the form of property owners. Part of the charm of social media is that it feels like a cottage industry. Influencer houses are simply bigger cottages. They preserve the fly-on-the-wall intimacy of the bedroom vlogger, and add the space and professionalism of a dedicated production facility. And as a bonus, upscale urbanites can now enjoy the amenities of 1600 Vine in peace. I wish them all a restful night’s sleep.