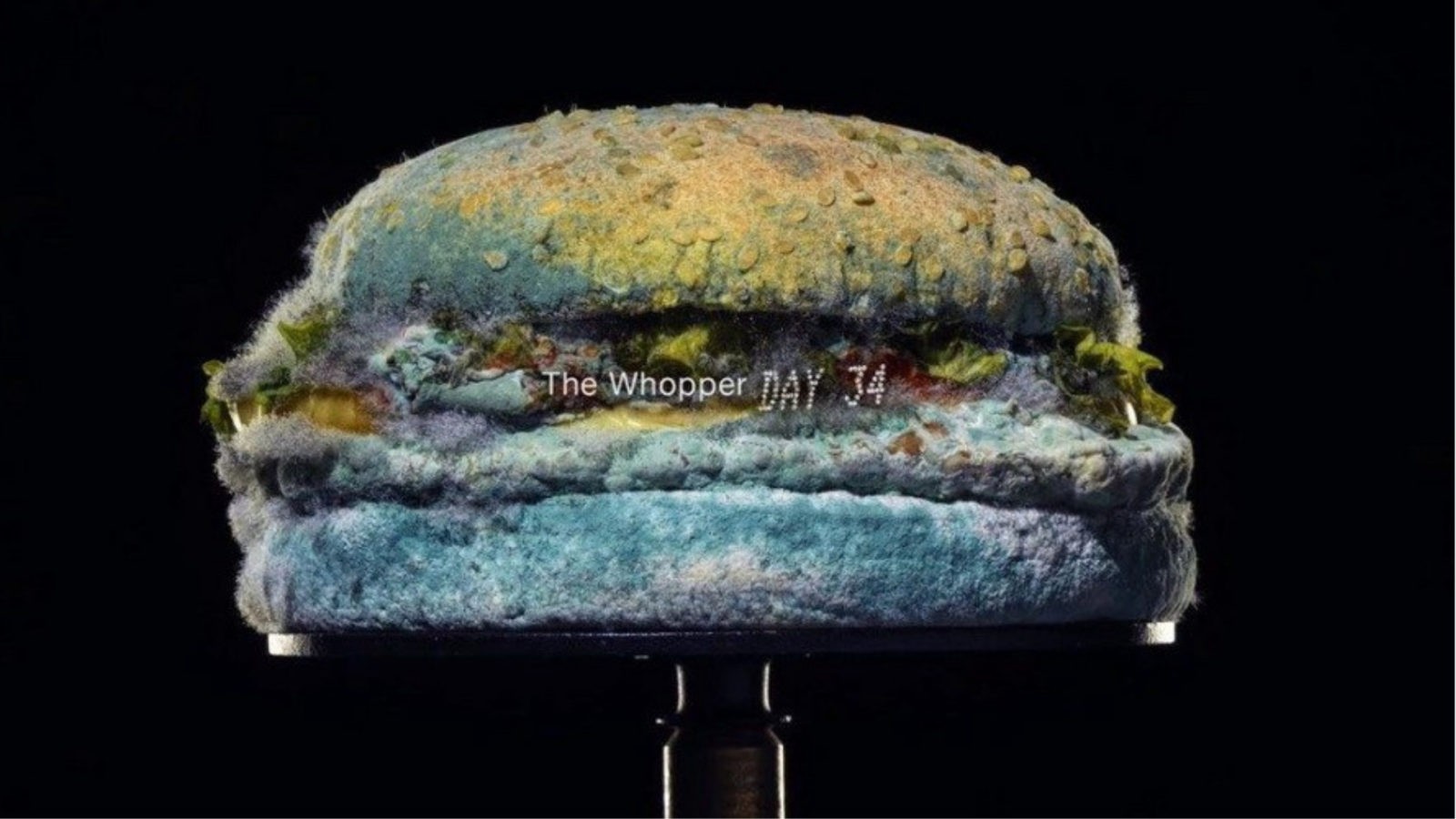 DO NOT READ THIS WHILE EATING

A moldy burger? We hear you think, why the hell would you advertise food that looks like it will literally kill you. Yes, we all prefer a fresh good-looking burger, but Burger King showed us the other side in their newest campaign which was published on the 19th of February 2020. A whopper which has been rotting for 34 days…

This ad campaign is meant to draw attention to the supply chain’s move away from preservatives and artificial flavors, which many fast-food chains have long been criticized for. The trend of transparency and the shift towards more ‘’natural’’ ingredients is now much more important for the fast-food industry.

Consumers are becoming more conscious towards food; with that you could say that the ‘‘natural beauty’’ trend hasn’t only made its way to the fashion industry but also into fast-food advertising. Burger King said it’s rolling out preservative-free Whoppers across the US and will serve them in all US restaurants by the end of 2020.

The shift towards less preservatives in fast food started in 2009 when a customer of McDonalds bought burgers and fries and kept them to see whether it would decompose. After 10 years, the food was only slightly decayed, which shows that McDonalds’ food is full of preservatives. This could indicate to consumers that all burgers are full of preservatives. Burger King saw an opportunity to win the trust of their consumers by making an anti-preservative pledge in this outstanding campaign.
Watch the video and see the beauty of no artificial preservatives.

· Burger King breaks every rule with this bold, eye-catching and unexpected campaign. How would you like seeing a big billboard with a dirty mouldy whopper? Whether it is positive or negative, it would attract your attention, right?

· Burger King makes people feel uncomfortable by showing them the other side of food. Because how did you feel after watching the video? Did you respect Burger King by showing you the reality or were you shying away from it and rather feel iciness from artificial food? At least, this commercial makes you think twice about processed foods.

· The ‘’consideration to visitation’’ rates increased by 22.8% after the consumers watched the video campaign, which is a remarkable result.

· Fast food restaurants have a bad reputation regarding how natural their food is. How can you, as a fast-food company, ensure that consumers still eat your products? The campaign shows the honesty and transparency of Burger King towards their customers.

Maybe you think the advertisement is brave, an industry-joke or you think it’s ugly. Anyway, just as the opinions about artificial ingredients, the opinions about the mouldy burger are divided as well. Consumers have called the mouldy burger ‘’gross, inappropriate and ridiculous’’ but on the other hand they call it daring. The campaign hopefully starts a shift in the world towards more natural food and transparent communication from food companies. After all, the beauty of real food is that it gets ugly.